Episode 24: Back to Ritchie 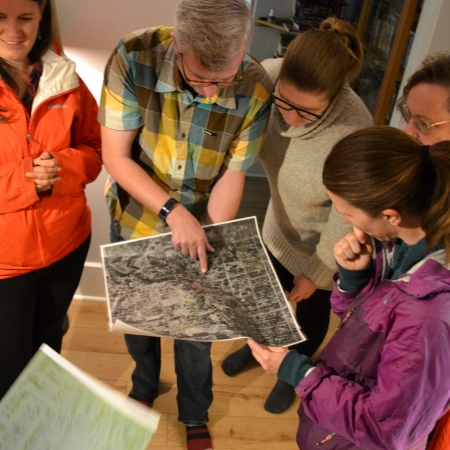 We’re back in the Ritchie neighbourhood for a second set of locals’ questions and a live history walk exploring their answers. Karen Wall wanted to know how one neighbourhood could support two independent cobblers. Nicole Anderson wanted to know the history of her home in Ritchie. And Scott Harris wanted to know what the story was behind the quonset-hut type rounded-roof buildings with the squared off fronting in the industrial area of West Ritchie.

Listen first, then scroll below for details and pictures.

Karen Wall gave us our first question: how can there be two independent cobblers operating practically right next door – Leckie Shoe Repair in Hazeldean, and Wallace Shoe Making in Ritchie?

We stopped in at Mike Wallace’s shop, Wallace Shoe Making, to learn more.

Next, Nicole Anderson and her partner Sam Billings wanted to know the history of their home at 9613 – 79 Ave NW.

They had already poked around the Henderson’s directories for that time, and learned that the house was built around 1924, and that a family named Dame used to live there. Our tour group went inside to talk about further research our team was able to do.

We were able to learn a lot more about the Dame family, and we found out the house has been around since at least 1917.

Two of the Dame brothers – George Dame and Aurelia Napoleon “Bunny” Dame – became renowned athletes. Bunny played in the NHL for the Montreal Canadiens in the 1940s.

Last, we headed down to the Ritchie Community League to explore Scott Harris’ question. He wanted to know what the story was behind the quonset-hut type rounded-roof buildings with the squared off fronting in the industrial area of West Ritchie. Specifically, he was thinking of buildings like Narayanni’s (aka the Arndt’s Machine Shop building), Southern Auto Body, the Clayworks building, and the Minchau blacksmith shop.

We learned that most of those buildings were built during a boom in the 1940s, except for the Minchau blacksmith shop. That building was erected in 1925, in a period of relatively hard times for the area.

The Minchau family’s stories are well-documented. The blacksmith shop has been threatened with demolition, but local groups are organizing to save the building, and the provincial government has halted the process until a heritage assessment can be completed.

All photos on this page are by Finn Phillips, unless otherwise credited.

In this episode we mention the Alberta Podcast Network listener survey, which is open til the end of June 2018.

This site uses Akismet to reduce spam. Learn how your comment data is processed.

Let’s Find Out is a proud member of the Alberta Podcast Network.

In our latest episode: your beginner's guide to the difference between a library and an archive. And why it matters if you can't get into one right now. Plus, 1916 diary entries about a mother embracing her son home for Christmas, a postcard of York boats with sails, and a ghost town on campus.
New episode out today. This December, Dr. Andrew Woolford delivered the Western Canadian Lecture, presented by the University of Alberta’s Department of History, Classics, & Religion.
How do you form a good historical question? In the latest episode, Chris and Trevor talk about trying to do that for a very specific reason: a Canada Graduate Scholarship grant application.